There are many different words for a flock of birds and the one we associate with starlings is usually a ‘murmuration’.

More specifically a murmuration is what we refer to when we see a huge flock of thousands or even hundreds of thousands of starlings flying together, creating ever-changing intricate swirling patterns as they do so. The word murmuration comes from the murmuring sound their wings make as they swoop and twirl across the sky.

Scientists have spent decades observing and researching murmurations trying to discover why starlings behave in this way. In the 1930s, Edmund Seleous, a British ornithologist and author, suggested that starlings must have psychic or telepathic powers that enabled them to co-ordinate their movements.

However, with advances in technology and the use of sophisticated cameras and digital image processing, modern scientists are now able to track the positions and velocities of individual starlings in a flock to gain a better understanding of murmurations.

The science of murmurations

In 1987 computer scientist Craig Reynolds created a simulation of flocking behaviour called Boids where the virtual birds in the system had to follow just 3 simple rules:

Separation – nearby birds had to move further apart

Cohesion – distant birds had to move closer together

Reynolds found that even with these basic rules it was possible to model complex flock behaviour. Some of these patterns were used to create computer generated swarms of bats and armies of penguins for Tim Burton’s film Batman Returns.

In 2008 a group of researchers from the Centre for Statistical Mechanics and Complexity in Rome made some significant breakthroughs in the science behind murmurations to advance our knowledge further. The team filmed murmurations of up to 4,000 starlings flying over The National Museum from multiple angles and built 3D reconstructions.

They found that the interactions in murmurations do not depend on metric distance as most models and theories at the time assumed, but on topological distance. That is, the interactions happen between a fixed number of birds, in this case six or seven, within a distance that can change, rather than between all birds within a fixed distance. It doesn’t matter how sparse or dense the flock is; the birds will still only interact with six or seven birds.

The team also found that birds tended to be closer to their neighbours on either side than the ones in front or behind. They theorised that this helps starlings avoid collisions as they perform their complex manoeuvres.

In 2013 a further study led by George Young from Princeton, an Ivy League research university in New Jersey, found that starlings in large murmurations consistently coordinate their movements with their seven closest neighbours. The researchers also found that starlings can simultaneously process information from those seven neighbours which is how they achieve something called scale-free correlation.

Instead of having a leader in the flock similar to geese flying in V-formation with scale-free correlation thousands are starlings are able to turn simultaneously without following one particular bird. 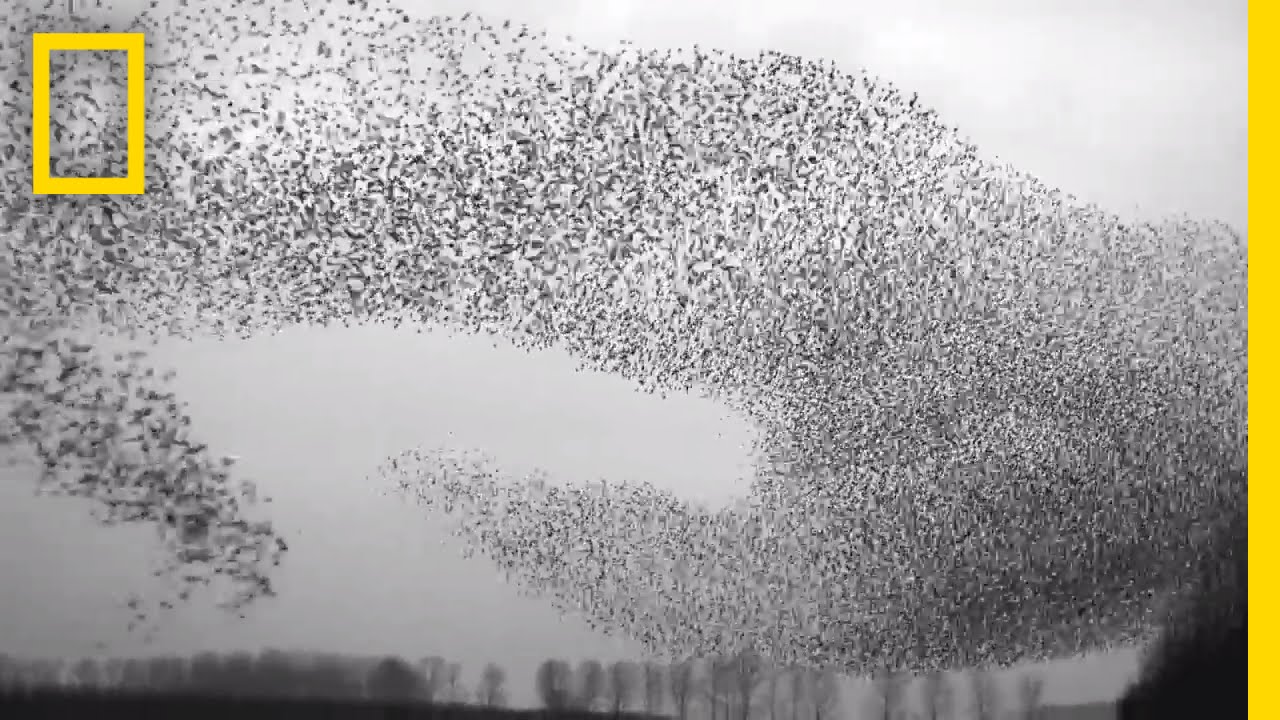 While scientists don’t fully understand how this happens, they think it may be similar to the phenomena found in other systems that are explained by physics, rather than biology, such as the formation of crystals, avalanches, or water being heated to steam. These changes of state between solids, liquids, and gases, and sometimes plasma, are known as phase transitions.

When a murmuration moves together it is behaving as a critical system, poised to respond in an instant to environmental changes. If a predator such as a bird of prey disturbs one part of the flock the individual responses of the closest birds transmit through the rest of the flock as a wave resulting in the changes in direction that case the spectacular patterns we see unfold across the sky.

And seemingly, little information is lost during the transmissions, in what particle physicists refer to as a system with ‘low noise’. This still doesn’t explain how starlings are able to fly at the synchronised speeds found in critical systems.

Another thing that scientists have discovered with the help of computer-simulated models is that the birds in a murmuration fly at a steady speed. When we view a murmuration it looks as though the birds are constantly slowing down and speeding up becoming more dense when they speed up and drifting apart as they slow down.

However, this is thanks to an optical illusion as we view the 3-D flock from our 2-D viewpoint of the world.

Why do starlings form murmurations?

Protection from predators is one reason put forward for the formation of murmurations. It is much harder for predators to pick out just one bird from the massive swirling flock as prey.

Another reason is that in cold weather the body heat from birds in a murmuration will raise the air temperature by a few degrees, so it keeps them warm at night. Starlings may also form murmurations as a way of exchanging information such as the location of the best feeding or roosting sites.

Where can I see murmurations?

The best time of year to look out for murmurations in the UK is from October to March. The largest flocks and most stunning formations occur during the winter when birds migrate from Europe to join the UK’s resident birds. The phenomenon happens during dusk just before birds settle down in their roosts for the night, although on dull and cloudy evenings they can start gathering earlier.